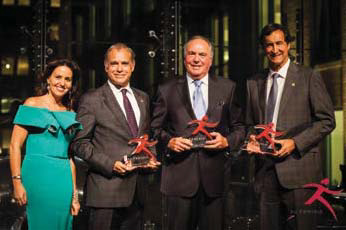 VIA Rail’s President Yves Desjardins-Siciliano received an award in September from Women and Boards, a not-for-profit organization that supports women in their leadership development, career enhancement, and access to Board seats. He was honoured during the Women and Boards recognition gala in the CEO category for his outstanding contributions to advancing the role of women in corporate governance at VIA Rail. VIA Rail has positioned itself as a Canadian leader in diversity in governance and its Board of Directors achieved gender parity in 2014. Three of its eight executives are women, and 30 % of senior managers within the company are women.

Left to right: Caroline Codsi, Founding President of Women and Boards with honourees Yves Desjardins-Siciliano, Robert Tessier, Chairman of the Board of the Caisse de dépôt et placement du Québec, and François J. Coutu, President and CEO of Jean Coutu.